Do you want to see a cure for diabetes in your lifetime?

Stay updated on our latest breakthroughs in research and patient care.

Look for an email from us soon.

Mask wearing and COVID-19 screening will continue at Joslin until further notice. To expedite building entry, please access COVID Pass the day of your on-site appointment to answer screening questions to receive a pass. We encourage all Joslin patients, including kids 5 and over, to get a COVID-19 vaccine and booster shots as recommended.

Also, please see our main COVID-19 web page for important updates regarding the availability of telehealth appointments at Joslin.
The information is available in English and Spanish.

BOSTON – (June 16, 2020) – Fewer than one in five adolescents and young adults with type 1 diabetes are successful in achieving the recommended 2019 A1C goal of below 7.5%, and the overwhelming majority fail to achieve the 2020 target of less than 7%. But young people who use continuous glucose monitoring (CGM) devices can significantly improve their overall blood glucose control, without increasing severe low or high glucose levels, according to findings from a 6-month, multi-center clinical trial. And both severe hypoglycemia (low glucose) and hyperglycemia (high glucose) can lead to emergency care and hospitalization. The study is published online on June 16, 2020, by the Journal of the American Medical Association (JAMA).

“We performed the study in a very high-risk population of young people with type 1 diabetes, the age group that has the greatest challenge attending to diabetes self-care while navigating the usual life challenges of adolescence and young adulthood. Across the entire lifespan, persons in this age group reach the highest average A1C of over 9% at age 19,” says lead study author Lori Laffel, M.D., M.P.H., Chief of the Pediatric, Adolescent and Young Adult Section at Joslin Diabetes Center.

The objective of the study was to determine if the use of CGM can improve overall glucose control among adolescents and young adults. A CGM is a device that continuously measures glucose levels, showing a reading to the user every 5 minutes along with a graph and arrows depicting the direction that glucose is changing on a display device or smartphone application. CGM also includes alarms to alert the user of high and low blood glucose levels or rapidly changing levels.

The study was a randomized, controlled trial involving 153 males and females between ages 14 and 25 at 14 sites, including the Joslin Diabetes Center. Participants had A1C levels between 7.5% and 11% at the start of the trial. Half were assigned to a group using CGM devices and the other half were assigned to a control group using the standard finger-stick method with test strips for blood glucose monitoring for six months.

The study found that the average A1C in the CGM group fell 0.4%, from 8.9% at the time the trial began to 8.5% at six months; whereas for people in the control group, their average A1C remained unchanged at 8.9% over the six-month study period. This substantial and significant improvement in glycemic control is one of very few interventions that have demonstrated a positive impact in this challenging age group. Researchers also found:

These improvements are important because lowering A1C significantly reduces the risk of future debilitating long-term complications like eye and kidney damage. 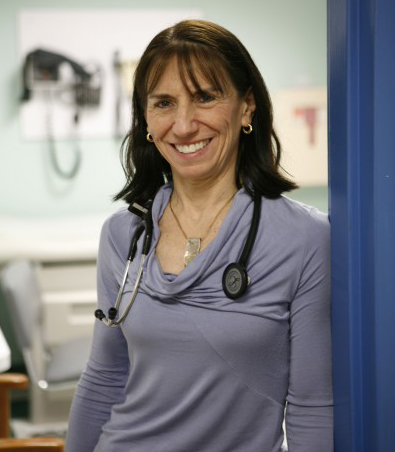 “At the beginning of the study, patients were spending less than nine hours per day in the target range. That means the overwhelming majority of the day and night these young people were experiencing hyperglycemia,” says Dr. Laffel. “And the increased time in range was not with an increase in severe low glucose levels. Overall, CGM use cut down the frequency of hypoglycemia, which is time below 70 and 54 mg/dL (severe), as well as limiting hyperglycemia, with a reduction in time above 180 mg/dL by nearly 1 ½ hours each day.”

Another striking discovery was that two-thirds of study participants were still using the CGM devices almost every day at six months, which may be attributed to the improved performance of this advanced technology. In contrast, prior studies indicated that only about 30% of similarly aged young patients continued to use the devices regularly at six months.

CGM is a valuable tool to offer to people of all ages with type 1 diabetes, and it can be especially helpful for young people who may be struggling with self-care and are seeking to improve their diabetes control

“The CGM used in the study helped reduce some of the burden of self-care as the CGM glucose values could be used for diabetes management without a confirmatory finger-stick. Today, CGM technology is even easier to use than the device used in our clinical trial. More recent CGM devices have an automatic inserter, a sensor that lasts for 10 days, and require no finger-stick blood glucose values for calibration.”

In addition, the study showed that there was no difference in adverse events between the two groups. Plus, the treatment impact for A1C at six months remained after adjusting for duration of diabetes, sex, and insulin delivery method.

“I believe that the young people in this study especially valued the reduced burden of self-care with the use of CGM over traditional finger-stick blood glucose monitoring. This study highlights the opportunity to target patients who may be struggling with diabetes self-care and in need of improvement by harnessing the advanced therapeutic tools available today,” says Dr. Laffel. “Then, we can see better outcomes now and in the future.”

Stay informed with the latest in Diabetes Care, Research, and Development.